Our Scalable Agitated Baffle Reactor combines a series of stirred tanks in one vessel with impellers for predictability and rapid scalability. Here we show you how we measure the residence time distribution and how it depends on operation parameters.

How we measure residence time distribution

Fluorescence measurements are excellent for residence time analysis because of picogram detection limits that allow characterisation of even the most dilute solutions.

A fluorescent dye droplet (5 μL) is injected into the reactor inlet flow. This small amount does not affect hydrodynamics. The dye travels through the reactor and we measure the outlet concentration with a fluorescence detector. The outer dye concentration provides the residence time distribution and characterises how much time compounds spend in the reactor. 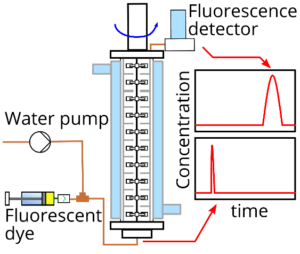 Residence time for a series of stirred tanks

The SABRe system works on the principles of the “tanks-in-series” model. In a single continuously-stirred tank reactor (CSTR), the fluid elements enter the reactor and are immediately mixed before flowing out.

In a series of several CSTRs, the flow distribution becomes narrower and more controlled – moves towards a plug-flow regime (where all of the elements exit the reactor at the same time).

This tightening of the distribution allows for better reaction control as there will be a smaller spread of flow elements at different stages of reaction. One of the ways to define this is with the Péclet number:

The Péclet number is a dimensionless number which describes axial dispersion – the relative width of the distribution curves like spreading out of a band in a chromatography column. A higher Péclet indicates less dispersion, and the values above 100 are referred to as quasi-plug flow distribution.

In a series of ideal stirred tanks, or in any other flow reactor, we want the reagent to spend exactly the time required. But, precise reaction control comes at a cost: higher precision requires more tanks in series. For example, the dispersion variance (a measure of width) decreases by 0.1 from 5 tanks to 10 tanks, but a further 0.09 reduction takes 90 tanks. 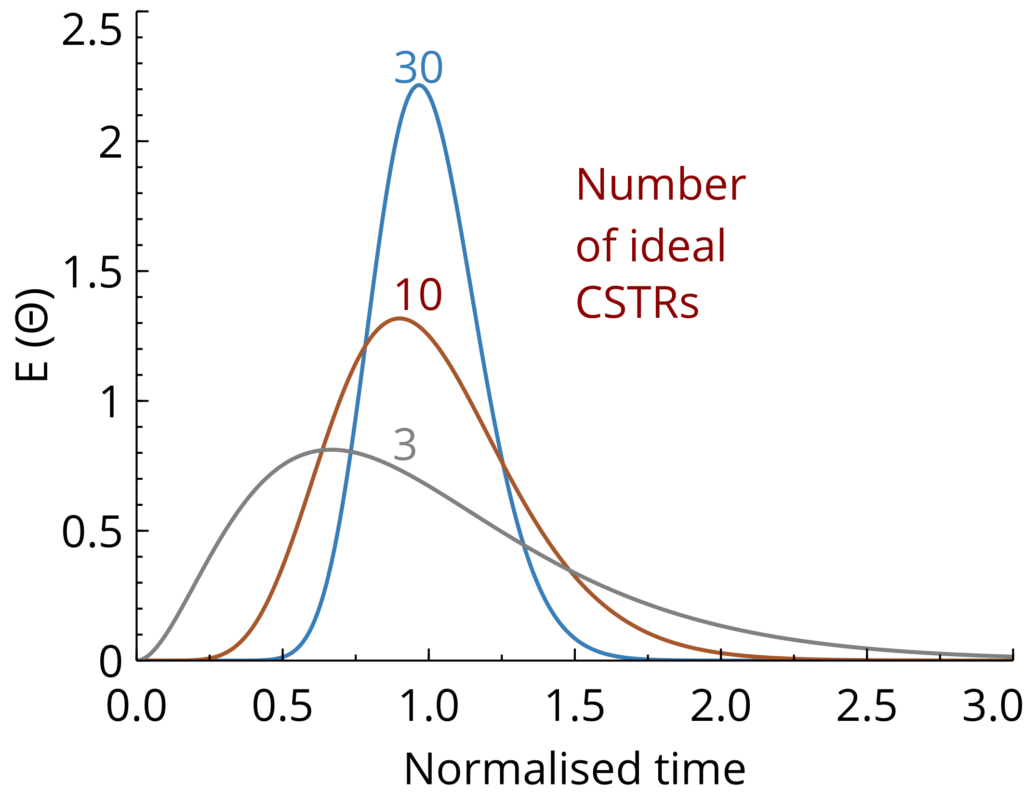 Residence time of the SABRe system

Yet, having a narrow residence time doesn’t tell the whole story. Mixing is vital for chemistry – it plays a big part in reactor performance, providing excellent heat & mass transfer which is crucial for product quality.

In the SABRe reactor, you can change mixing rate independently from the fluid flow rate in contrast to static mixers and tubular reactors.

A few examples of residence time distribution plots for the reactor are presented. These are typically not shown as concentration vs time, but are presented as the normalised distribution function, E(Θ). This is so that the flow performance of reactors of different sizes can be compared directly. For a given mean residence time, the width of the distribution in the SABRe reactor is dependent on the stirrer rotation rate. This is because rapid mixing moves fluid farther and increases dispersion (or back-mixing).

To gain a deeper understanding of the SABRe reactor system – which contains 10 CSTR tanks – we studied the residence time distributions for various stirring and flow rates.

The data shows that 10 tanks in the reactor typically performed better than 10 ideal CSTRs in most cases. Yet, it brings the extra benefits to mixing, heat transfer and mass transfer. Even at lower flow rates (where back-flow becomes more significant), the reactor performs well and the high mixing speeds only enhance to enhanced rate of reaction and heat transfer.

How is it possible for a series of stirred tanks outperform an ideal system? The answer lies in secondary flow patterns. The mixing impellers “divide” each tank into two with little interaction between the two halves. The fluid gets caught in separate vortices and only an exceptionally high mixing rate creates sufficient turbulence and chaotic flows to intermix the tanks. 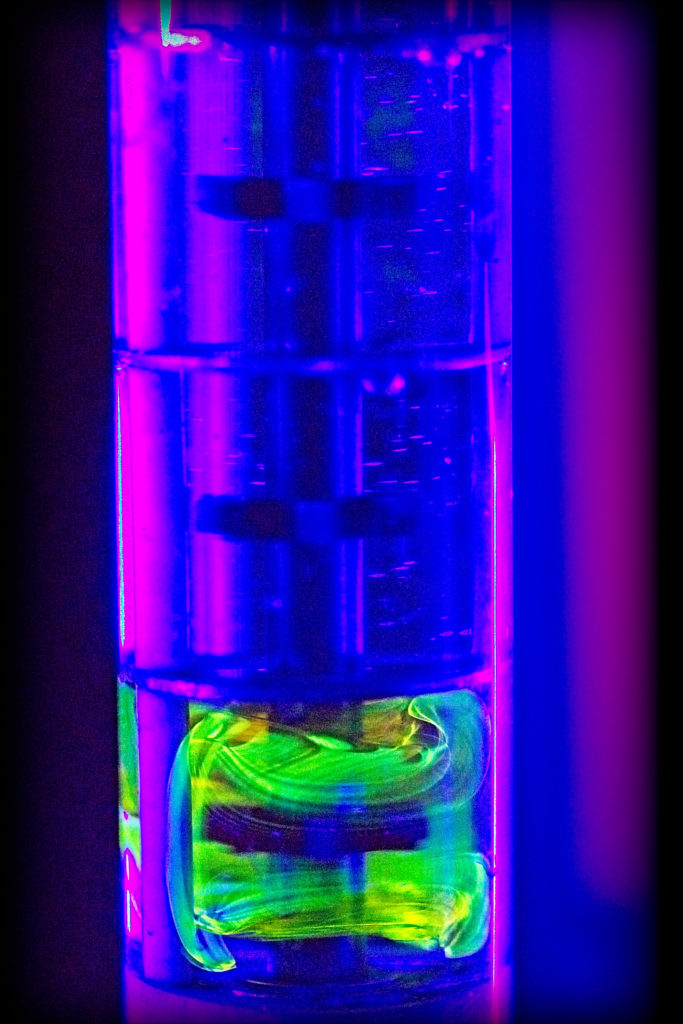 The SABRe system (available in steel, Hastelloy or glass) is suitable for a wide range of chemical applications. Combining simplicity with superb reaction control, SABRe is the best choice for simple, safe and cost effective chemistry.

What can the SABRe do for you today? Get in touch and arrange a trial. 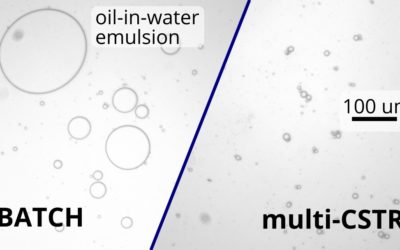 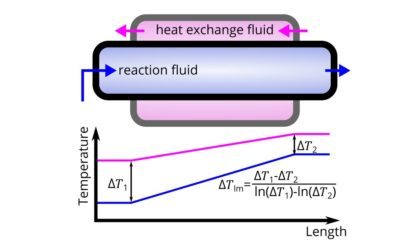 How to calculate heat transfer in continuous flow applications

Continuous flow (such as micro-reactors) are superior for exothermic reactions. How do you compute the thermal performance of a reactor? 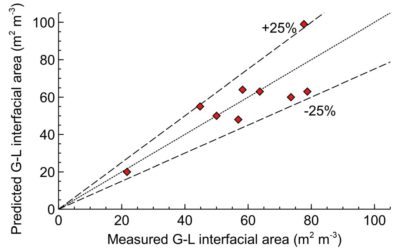 How the SABRE system provides large gas-liquid area to maximise the reaction throughput and selectivity. 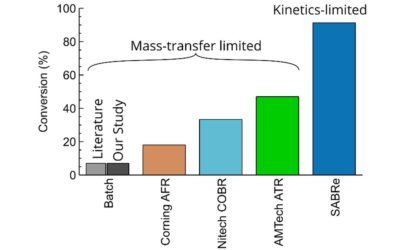 We showed superior performance of SABRe in the enzymatic (liquid-liquid) esterification. 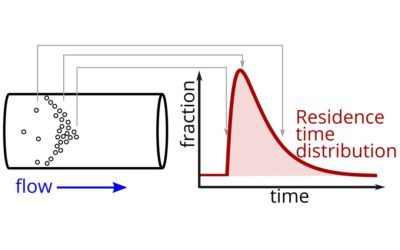 How residence time is vital for throughput and product quality.